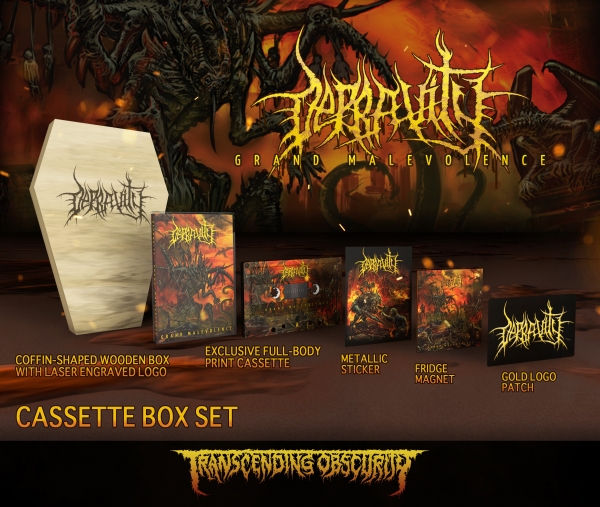 Everything about this album's cassette box set screams phenomenal! For starters, the coffin-shaped wooden box is made of high quality pine wood, and has the Depravity logo laser-engraved on it. It also contains the following fantastic items:

After releasing a groundbreaking album in 'Evil Upheaval', Australian death metal giants Depravity take things to the next level on their new album 'Grand Malevolence' which is one of the most devastating albums of this year. It's technically evolved, with masterful songwriting meeting skull-smashing brutality, executed with blinding speed and power. Each song is a testament to the best expression this style holds, showcasing facets of the sub-genres without allowing it to dilute the overall intensity and momentum. There's technical death, brutal death, even progressive parts designed around the same dark and pummelling death metal Depravity are known for. It's a clear tour de force and it might take multiple listens for that realization to sink in, because the album is so meticulous and intense that it might be too much to grasp at one go. Depravity have created a masterpiece and set high standards with it not only for themselves but for the genre as a whole, eschewing concepts of stylistic differences, trends and schools, and imbibing it all to create the most lethal expression possible. Prepare to get blown away. creditsreleases December 4, 2020