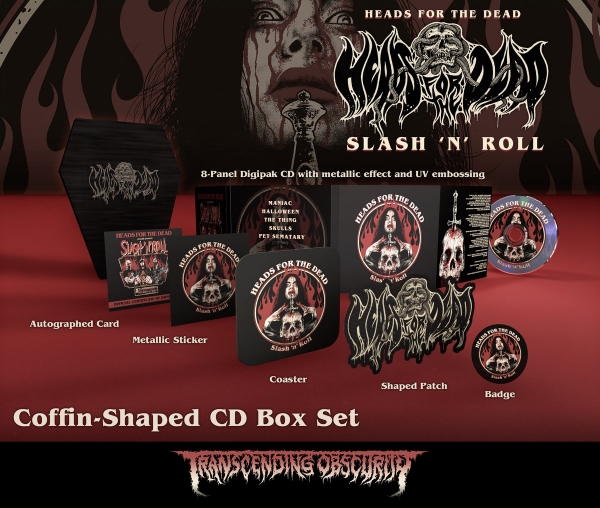 Here's a beautiful, natural-textured, brown-coloured wooden box set with matte finish that has the band logo laser-engraved on it with the label logo on the back. It's strictly limited to 75 copies and comes packed with the following special items -

After releasing two standout full length albums which were both refreshing and thrilling for this style of death metal, Heads For The Dead whose lineup includes members of venerated and experienced bands such as Wombbath, Gorefest, Revel In Flesh, Hail of Bullets, have come up with an EP paying homage to the classic horror movies which have inspired their music in a big way. Having already established their own horror-tinged sound, it's fascinating to see the band employ a more crusty approach in giving these unforgettable horror movie tunes a brand new vision and output. There are reinterpretations of theme songs from movies such as Maniac, Halloween and The Thing, done entirely in the band's style with lyrics and death metal extremity and then there are two fitting cover songs from punk bands like Misfits and Ramones. All in all, this is an exciting and highly enjoyable release not just for the Heads For The Dead fans, who have a new full length in the works, but also just about any fan of horror movies and heavy metal music.credits

Artwork by The Art of Badic