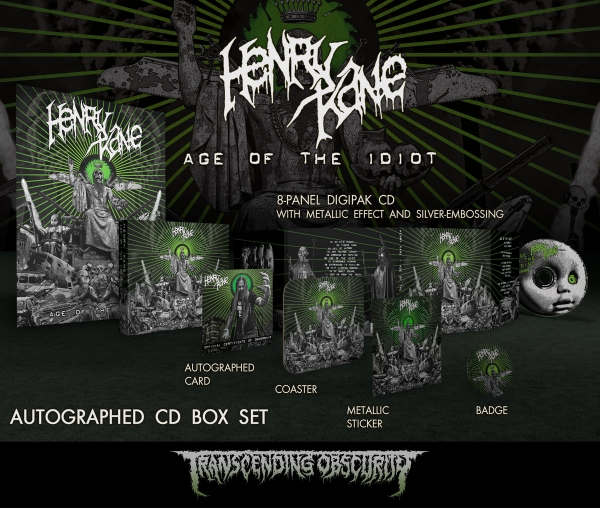 The HENRY KANE CD box set has silver embossed logo with UV on selected areas of the box set. Each of them comes packed with the following exclusive items -

The raging grind/crust/death metal monster HENRY KANE is back with an album just as sonically ferocious as before but also mature. The debut album was hailed as one of the heaviest albums ever recorded and this time Jonny Pettersson of WOMBBATH, HEADS FOR THE HEAD, NATTRAVNEN fame, joined by a slew of new members, proves that there's more to this band's music than just an intimidating wall of sound banging against you repeatedly. 'Age of the Idiot' is one of the most anticipated albums in the style which fits snugly alongside similar-minded labelmates in MEDIUM, GOREGANG, and BONES. The album is remarkably varied without compromising on the viciousness, even incorporating an atmosphere of ominous doom laden with shades of melancholy. It is an album that is a reflection of the current mindset that is responsible for the deplorable acts of people around the world fuelled by misuse of technology. This is the perfect soundtrack to celebrate our rapid descension into self-induced apocalypse.