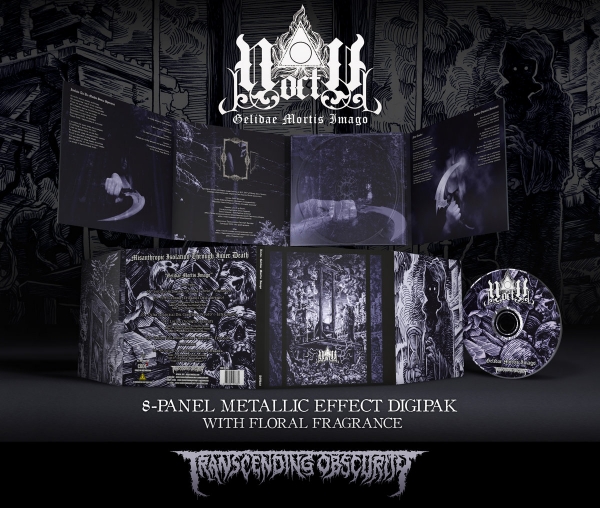 We couldn't think of a better band than NOCTU playing funeral doom music to try out new things such as the floral fragrance effect on digipaks. Indeed, as you consume their music you can detect traces of flowers that are usually showered upon tombs. It's a rare thing for sure.

NOCTU play haunting, atmospheric blackened doom metal that infects the soul, eviscerates it and leaves it hollow, bereft of the abundance of feelings that once invaded it. This is an unexpectedly sharp, incisive, singular and ultimately extremely effective form of expression, imbued with a deep, harrowing tone that has the power to incapacitate one's thoughts and rendering the person helpless to its introspective melancholy. Never before has the music of this kind shown such clarity and purpose without degenerating into incontinent lapses of urgency. This is stoic, consistent and stately doom with magical convincing power; the impact is profound and lasting. This perhaps epitomizes the funeral doom sound but has added atmosphere and bleakness to keep it relegated to just that. A measured, patient listen is sure to move the listener and those with physical copies of this release will even catch a whiff of the fragrance of flowers showered upon tombs from it.