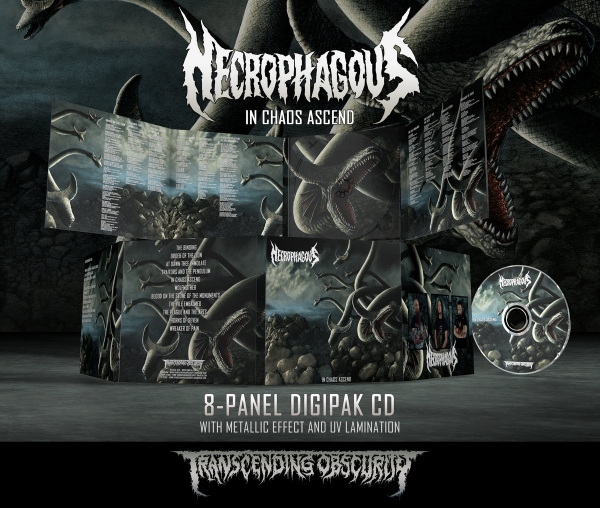 These are high quality 8-panel digipak CDs having superior thickness and moreover have a metallic effect throughout in addition to gloss UV lamination done on parts of the artwork. It features the artwork of Mattias Frisk and looks stunning.

Members of Visceral Bleeding and Entrails converge to forge a style of death metal that's both old school in sound and also contemporary in the way they inject the irresistible grooves. In effect, it doesn't sound too different from a cross of the aforementioned bands, with a healthy dose of the genre's progenitors such as Morbid Angel, Deicide, Cannibal Corpse, Dying Fetus and like. The amalgamation of the distinct two styles is thorough and highly potent. There's always powerful riffing forming the trajectory for the songs which are punctuated by staggering breakdowns and intermittent stop-start parts that seize the momentum and release it with magnified force while keeping up the intensity level throughout. The thick, hoarse vocals add a layer of menace over the proceedings which refuse to relent, as you sink deeper into their carefully laid quagmire of insanely catchy music with all the right elements. 'In Chaos Ascend' is a well-rounded, fulfilling and highly addictive debut from a lineup having all the experience to pull it off with aplomb and make it an unforgettable affair too.