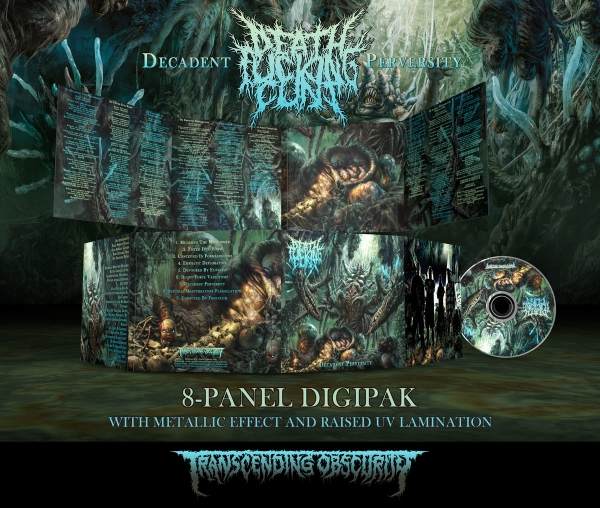 These are high quality 8-panel digipak CDs with excellent full colour printing and moreover have a beautiful metallic effect throughout in addition to gloss raised UV lamination done on parts of the unreal Daemorph Art artwork. This is the first press of the CD which is limited and hand-numbered to 500 copies. Each CD comes with a download code and a transparent logo sticker.

With a name like that, it's apparent that DeathFuckingCunt from Australia don't pull any punches. Their music, too, is a violent, destructive, cathartic expression of brutal/technical death metal where everything is played at blinding fast speed. It's a sheer delight to witness extremity in its unbridled form, without it degenerating into thoughtless barbarity - despite the utter mayhem, there's a method to this madness, with structures being followed and grooves being infused at breakneck speeds, often culminating in heart-stopping breakdowns and even electrifying solos. The sheer aggression on display here is an adrenaline-rush, guaranteed to leave you deeply satiated whether or not you're a fan of this kind of death metal. The brutality combined with technicality is refreshing because too often the latter is devoid of the pugnacity which is here in spades. This is an unstoppable high-speed juggernaut that will invariably pulverize you but it's one that you won't see coming. With 350 bpm speeds being surpassed, the members, also in Wardaemonic, harness supernatural energy to pull off this overwhelming, shocking album that is bound to leave an indelible impression, especially physically. 'Decadent Perversity' is the next level in brutal/technical death metal extremity while adhering to the tenets of the genre.